We went to Amherst Island in Canada looking for owls.  Tromping aroung the woods, we were mildly freaked out by the chickadees stalking us.  As a joke, Kathy put out a finger and they flew right over to her!  Like we were in a freaking Disney movie, or something! Turns out, we were on a bird refuge of some sort, where people always come to feed the birds from their hands.  Man, were we spooked for a bit, though.
at 10:37 PM No comments: 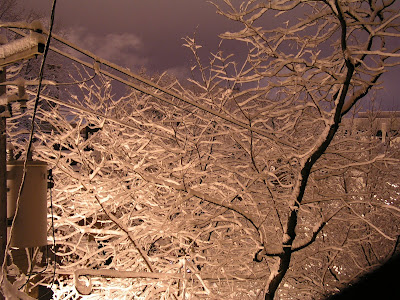 Like all things that enter this house, the glass etcher has been modified and upgraded.  I was getting upset that a single can of propellant was only able to do about 7-8 small monograms.  So, the new set up includes the same (slightly altered) nozzle and abrasive, only attached to a SCUBA tank, pressure regulator dial and foot control. Mwooh hah ha ha ha.  Bring it on!

So, now I can do much larger areas, much faster and much more opaque.  Opaquely, ew.  Here is my attempt to make use of the two screwed up carafes from the other day.  It isn’t visible in the picture, but you can barely make out the B within the stripe of the finished carafe.  Oh well, I guess I’ll just have to keep that set.  Dang.

On a side note, I am amazed with how well the stencils are working.  I was expecting results similar to my experiences with paint stencils...all sloppy and smooshed under the edges of the stencil because I’m impatient and that sucks.  Initially, I thought that I’d have to mess with stencil adhesive.  But no, they’re coming out really crisp, even if part of the design lifts up because the glass is curved.  As long as you spray at a 90 degree angle, it works beautifully.
at 11:15 PM No comments: